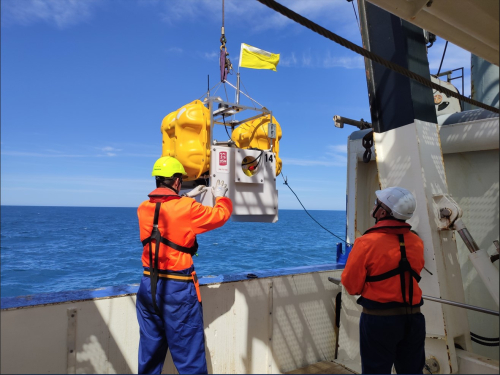 Scientists are about to embark on the largest seafloor geodetic and seismological instrument deployment ever carried-out to study offshore slow slip events.

This milestone study will make Tairāwhiti’s shores one of the most studied areas of slow-slip activity in the world.

Slow-slip events are slow motion earthquakes that occur when two tectonic plates start lurching slowly past one another. These events take place over days, months, or even years, rather than in seconds like a normal earthquake.

Slow-slip has been detected regularly on the Hikurangi Subduction Zone, our largest and most active fault, where the Pacific Plate dives down westward beneath the Australian Plate, just off the East Coast of Te Ika-a-Māui/the North Island.

This slow release of energy means slow-slip events are undetectable by humans and even typical seismometers, as they don’t produce any noticeable shaking. Instead, scientists must use GPS and seafloor pressure sensors to detect the tiny (millimetre to centimetre) movements.

To better understand the slow slip activity happening on the Hikurangi Subduction Zone scientists from Aotearoa New Zealand and around the world will be deploying 50 instruments offshore from Tairāwhiti. These instruments will be in place recording earthquakes and slow slip events for two years.

“This is a huge deployment of a range of different instruments” said Dr Laura Wallace, from GNS Science. “Over 40 of the instruments have seafloor pressure sensors which can detect vertical movement of the seafloor down to the centimetre.”

This international study brings together geophysicists with oceanographers to greatly improve the understanding of vertical movement of the ocean floor during slow slip events and is one of the first studies of its kind to do so.

Ocean currents and large coastal eddies in the deep ocean create “noise” in the seafloor pressure data, which makes it more challenging to detect the smallest movements of the seafloor.

“By deploying oceanographic sensors, we can accurately characterize the ocean eddies and then remove that “noise” from the seafloor pressure data to reveal where the slow slip events are occurring in unprecedented detail,” said Professor Randy Watts of the University of Rhode Island, the lead physical oceanographer on the team.

“Having so many diverse types of sensors in place for the two year period will give us our highest-resolution view yet of what’s happening on the offshore subduction zone and how slow motion earthquakes relate to earthquakes and tsunami.” Said Dr Wallace.

The Hikurangi Subduction Zone is Aotearoa’s largest source of seismic hazard, with the potential to generate earthquakes as large as a magnitude 9, which would result in a tsunami impacting the whole of the east and south coast of Te Ika-a-Māui/North Island and parts of Te Waipounamu/South Island.

Ongoing research into the Hikurangi subduction zone is essential to understanding this hazard and the risk it poses to communities.