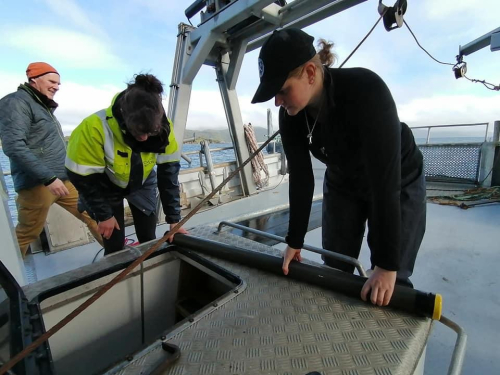 University of Auckland PhD student, Laura McDonald, is seeking to understand our ocean paleoclimate, and what it could mean for our future, by analysing pollen that made its way to the seafloor over the last one million years.

McDonald is part of a larger Marsden funded project, led by Dr Lorna Strachan from the University of Auckland, investigating the hypothesis that earthquakes and volcanic eruptions occur more frequently in periods of warmer climate and higher sea level.

Paleoclimate is the study of climates of the past, and sediment cores act as a record of the environment, they allow scientists to examine mud and other materials that have been building on top of one another for thousands of years.

“It could be easy to wonder why we’d care about what the climate was doing 800,000 years ago” said McDonald “But some past climate states represent where our climate could be heading with rising anthropogenic greenhouse gasses.”

This hypothesis is not new, but the team are the first to investigate it and they are doing so through a 500-metre-long sediment core retrieved by IODP (International Ocean Discovery Program) from Aotearoa New Zealand’s largest and most active fault, the Hikurangi Subduction Zone.

McDonald’s work is a crucial step in answering this question. Where other members of the team are identifying past earthquakes and volcanic eruptions, McDonald is answering the question of what climate they occurred in.

“When I say I study mud, people don’t understand the amazing detail you can get from it. I’m looking at mud from 800,000 years ago and from the tiny pieces of pollen within it I can tell you what the climate was doing, and that is just one tiny part of the puzzle, but together we can answer these big important questions.”

Pollen can be used as a tool in understanding paleoclimate because different species of plants live in different climate conditions, and pollen is one of the traces they leave behind.

When pollen is released by plants, some of it ends up carried out to sea by the wind, or it falls into rivers which then deliver sediments out to the seafloor in mass flow events. Mass flow events occur when sediment built up on a continental shelf is displaced by an earthquake, sending it flowing out to the seabed like a landslide.

Plant species are also distributed differently across the motu, so pollen can also give scientists a clue to where sediment into the Hikurangi Subduction Zone is coming from.

By identifying pollen in the cores from Kaikoura and Mahia Canyon, McDonald can also build a greater picture of not only the past climate, but also the source of the sediment itself.

Answering the question of whether the climate impacts the frequency of earthquakes and volcanic eruptions allows for improved understanding of these events and better forecasting.