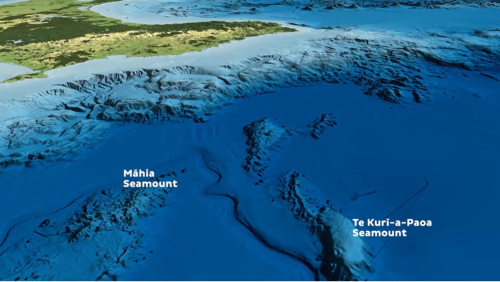 For the past five years, scientists from 16 countries have been studying Aotearoa New Zealand’s largest and most active fault, the Hikurangi Subduction Zone. The research team has uncovered critical new knowledge, forecasting a 25% chance of a major event on that fault in the next 50 years. A new short documentary explores what they’ve found.

The Hikurangi Subduction Zone is part of the tectonic plate boundary that runs the length of Aotearoa, it starts just off Tairāwhiti and runs down to the bottom of Te Ika-a-Māui/The North Island. This zone is where the Pacific Plate subducts or dives down westward beneath the Australian Plate.

“The Hikurangi Subduction Zone is Aotearoa's largest source of seismic and tsunami hazard” said GNS Scientist Dr Laura Wallace, the lead researcher on this project “understanding its activity now and in the past is critical to understanding our present and future risk”.

While it is now well known that subduction zones pose a huge hazard to communities, before this project it was unclear exactly how active our subduction zone is, and how many major events have occurred in the past.

This project, funded by the Ministry of Business, Innovation, and Employment Endeavour Fund sought to answer several important questions about not only the big shakes the fault is capable of, but also movement so slow that seismometers can’t even detect them.

“Slow-slip events are like slow-motion earthquakes, with more rapid than normal movement between two plates.” Said Wallace “but in an earthquake this movement happens in a matter of seconds or minutes and the sudden energy release causes strong shaking. In a slow-slip event the energy is released slowly, over weeks or months, without strong shaking”.

Although we can’t feel them, slow-slip events could have big implications for how we understand earthquakes.

“We’ve potentially identified a physical process behind triggering slip on this megathrust subduction zone” Said GNS scientist, Dr Emily Warren-Smith “in this case it's triggering slow-slip, but it could also trigger a large, damaging earthquake that causes a tsunami.”

The team looked to the past to understand the Hikurangi Subduction Zone’s earthquake potential, using long sediment cores to uncover 8,000 years of earthquake history.

“From the onshore work, we’ve found evidence of 10 large earthquakes over 7,000 years” said GNS scientist, Dr Kate Clark. “In the southern part of the subduction zone, the average time between these earthquakes is about 500 years.”

This research allowed researchers to forecast the likelihood of an event like this happening again in our lifetime, finding a 25% chance of a major earthquake and tsunami on the southern Hikurangi Subduction Zone beneath Wellington and the Wairarapa in the next 50 years.

Throughout the project, researchers engaged with local communities who will be most impacted by a major Hikurangi Subduction Zone event, holding 230 public talks and hui across the motu over the five years.

Two tangata whenua-led kaupapa played a key role in enhancing community resilience to earthquakes and tsunami in Wairoa and Ruatoria. Through Mātauranga Māori, community resources and plans were created, bringing together all available information and understandings to directly benefit local communities.

“Making room for rangatiratanga and indigenous epistemologies is critical for progressing research and innovation in Aotearoa” says University of Canterbury researcher Kristie-Lee Thomas.

The short documentary, along with three shorter videos specific to three regions along the East Coast of Te-Ika-a-Māui, are another opportunity for local communities to hear about this research and its findings.

While some of these findings are unsettling, this knowledge has allowed emergency managers to better understand their community’s risk and begin to help people prepare.

Key preparedness actions include practicing ‘Drop, Cover, and Hold’ to protect yourself during earthquake shaking and preparing a grab bag so you can evacuate the tsunami zone immediately after a long or strong earthquake.