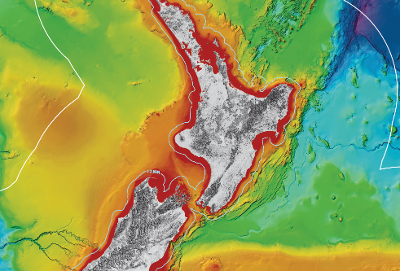 Cheyenne Christensen-Field, a researcher at Massey University’s Joint Centre for Disaster Research, found that knowing your tsunami risk doesn’t always mean preparing for it, in her recent study of the Hawkes Bay, Bay of Plenty and Eastern Auckland areas.

Last year, Christensen-Field launched an online questionnaire, which was shared by East Coast LAB and Civil Defence and Emergency Management groups, to study levels of perceived tsunami risk and levels of tsunami preparedness in each of the three regions, as well as investigating what motivated people to prepare, or not prepare.

While respondents were mostly aware of their tsunami risk, many of them had not taken steps to prepare.

“For most people who have not prepared, they just haven’t thought about it” said Christensen-Field “this was most often the case in Auckland where seismic activity is less frequent, so tsunami risk isn’t front of mind for many residents, despite being at risk of tsunami from regional sources, like the Kermadec trench”.

Having a potential local tsunami source, like the Hikurangi Subduction Zone, on your doorstep could be a key factor that encourages people to stay prepared.

“For Hawkes Bay, the Hikurangi Subduction Zone is a constant reminder of their tsunami risk, and recent tsunami warnings in 2021 could have emphasized the risk for residents in the Bay of Plenty.” Said Christensen-Field.

Residents who did not live in tsunami zones often reported this as their reason for not preparing, but Christensen-Field says it is important for them to prepare as well. “Although they may not be directly impacted by the tsunami, damage to local infrastructure may still affect them.”

Everything from roads, water and telecommunications to emergency services and food supply chains could be impacted by a tsunami, so it is important that every household takes steps to prepare.

The results of this study will be valuable to emergency managers as it will help them improve disaster awareness and encourage preparation.

People surveyed were also more likely to say that a region had a lower tsunami risk if they didn’t live in or around that region. This could mean that people are not taking the same level of awareness and preparedness with them as they travel around the motu.

With many kiwis travelling to coastal areas over the holidays, it is important that they understand the tsunami risk in that area and consider what steps they could take to stay prepared during that time, such as keeping a “grab bag” in the car in case they need to evacuate.

One way to prepare for a tsunami is to know your tsunami evacuation route and practice it through a hīkoi, or walk, during East Coast LAB’s Tsunami Hīkoi Week. Knowing where to go means that you and your whānau can act quickly to evacuate following a long or strong earthquake.