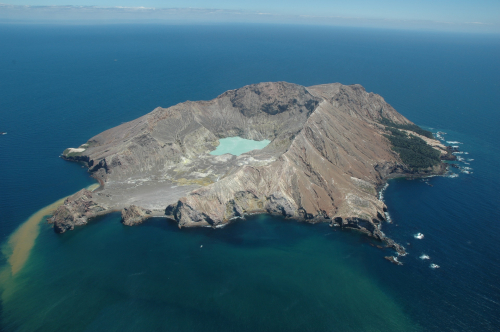 A team of scientists are beginning an investigation of Aotearoa New Zealand’s near-shore volcanic islands, Whakaari/White Island and Tūhua/Mayor Island to better understand the risk they pose to the Bay of Plenty.

The team – led by Dr Craig Miller, a volcano geophysicist at GNS Science – aim to unravel the dynamics of New Zealand’s volcanic islands in the Ministry of Business, Innovation and Employment Endeavour-funded research programme, Beneath the Waves: Preparedness and resilience to New Zealand’s nearshore volcano hazards.

Using innovative techniques and equipment to image and assess the mostly submerged volcanic islands will greatly improve what we know about these offshore volcanoes. It will also aid the team’s ability to quantify, communicate and improve forecasts of occurrences of a range of hazards from these volcanoes, including their ability to generate tsunami.

The outcomes of this work will allow scientists and emergency managers to better understand the hazards posed by these volcanic islands and guide future work to reduce the vulnerability of communities, infrastructure, and cultural taonga along the Bay of Plenty coast.

Hazards and potential impacts from volcanic eruptions are difficult to forecast. The explosive 15 January 2022 Hunga Tonga-Hunga Ha’apai volcanic tsunami surprised many researchers because of its far-reaching impact.

That eruption generated multiple hazards that impacted communities and infrastructure in Tonga and around the Pacific – including New Zealand. The eruption produced fast-moving pyroclastic flows, atmospheric pressure waves and a large eruption column and plume which reached at least 30 kilometres in height and blanketed Tonga in ash. Most impactful, however, was the tsunami that arrived just minutes after the eruption.

Volcano-generated tsunami are rare, but potentially very dangerous to nearby coastlines. The proximity of Whakaari and Tūhua to the Bay of Plenty coast means that a tsunami generated by a volcano flank collapse or large-scale underwater eruption would arrive quickly to the Bay of Plenty shoreline – within half an hour.

A tsunami generated by an earthquake on the Hikurangi Subduction Zone would arrive at the east coast just as quickly. However, while a long or strong earthquake is a natural prompt for people to evacuate to higher ground or as far inland as possible, the natural warning signs of a potential tsunami from a volcanic eruption may not be obvious.

With little time for detection and warning, and without the natural warning sign of a long or strong shake, a volcano-generated tsunami could arrive before people have begun to evacuate.

Island or undersea volcanoes can generate a tsunami in multiple ways: a shallow water explosion, cone flank failure or rapid caldera collapse, pyroclastic flows, shockwave/pressure waves from the eruption, or a combination of these. These complex source mechanisms are far less understood than earthquake generated tsunami. This new research will increase our understanding of the dynamics and impacts of these rare yet hazardous events.