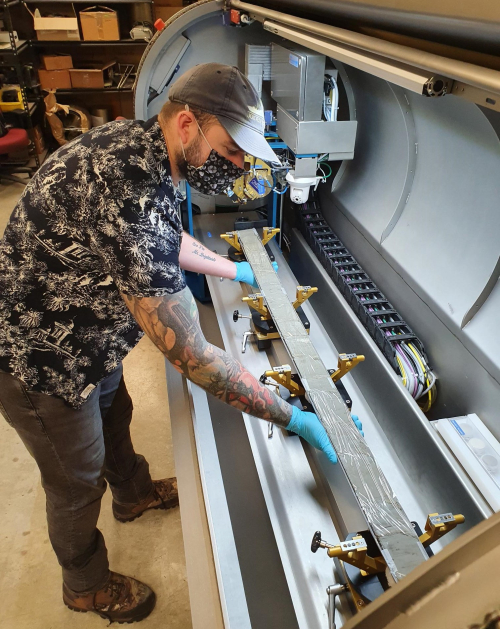 Scientists are studying close to one million years of history on the Hikurangi Subduction Zone, using a high-resolution core scanner.

A 500-metre-long sediment core from the Hikurangi Subduction Zone, Aotearoa's largest and most active fault, is being scanned to find the make-up of each layer of sediment at the International Ocean Discovery Programme (IODP) in Texas.

“Each layer tells scientists something about what was happening on the Hikurangi Subduction Zone over the last 1 million years, and helps to uncover the relationship between earthquakes, volcanoes, and global climate,” says Dr Adam Woodhouse, micropalaeontologist working on this Marsden funded project.

“The scanning takes around 100 hours, but first each centimetre of core must be inspected and prepared to ensure a successful scan.”

Understanding the make-up of each layer of sediment requires a lot of information, including its colour, density, magnetism, and geochemical composition.

“I’m shooting x-rays into the sediment to explore the relationship between volcanoes, earthquakes and global climate. I feel incredibly lucky to get to do what I do!”

As a micropalaeontologist, Dr Woodhouse studies the fossils of microscopic organisms, called foraminifera, that are found in the sediment.

“These organisms are incredibly well studied, we know when they would have lived and in what temperatures and conditions, so finding them in the sediment tells us a lot about what the ocean was like at that time.”

Alongside the make-up of the sediment, identified by the scanner, Dr Woodhouse’s work with fossils will help the team deduce how old each layer is and what was going on in the ocean around the Hikurangi Subduction Zone over the past 1 million years.

“If we can date when events happened, like volcanic eruptions, we can figure out if they happened more often when the climate was warm and sea levels were higher.”

This project is the first to test the hypothesis that higher sea levels associate with warmer climate increases how often volcanic eruptions and earthquakes occur.

Sediment cores are taken by drilling down into the seafloor, capturing all the layers of marine mud, sand, volcanic ash, bits of shells, and anything else that has accumulated on the seafloor over hundreds of thousands of years.

Earthquakes are forecasted by looking at how often events have happened in the past, so understanding how higher sea levels could impact the frequency of these events helps scientists create more accurate forecasting.

Scanning this core is one important step in this three-year long Marsden funded project which began in March 2021. Dr Woodhouse is one of a large team of scientists, with more still to join, who will use various methods, including mātauranga Māori, to investigate this hypothesis.