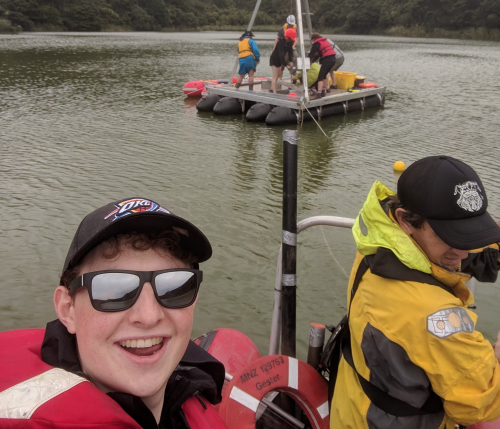 Sediment cores are taken by drilling down into the sea floor and are a layered record of all the land and volcanic debris that has been deposited. Scientists study these cores for signs of abrupt changes in the layers, which indicates if an earthquake or volcanic eruption occurred.

This core is the longest ever recovered from the Hikurangi Subduction Zone and represents the last 800,000 years, making it one of Aotearoa New Zealand’s longest records of earthquake history.

“This is the first chance we’ve had to look at these longer timescales and look at how the environment has changed, which helps improve our broader knowledge of the margin” says Shorrock.

Shorrock is the first PhD student to join a collaborative team of researchers looking at different markers of environmental change, volcanism and earthquakes, to build a better picture of how sea level change has impacted that activity over the last 800,000 years.

Scientists have previously proposed that there is a link between sea level rise and increases in the frequency of earthquakes and volcanic eruptions, but this project will be the first time that this hypothesis has been tested.

Shorrock’s previous Masters project looked at the first 100-metres of this core, studying the processes that occurred over the last 42,000 years which saw three alternating periods of warm and cold climates. This laid the groundwork for his PhD project which looks at the next 400-metres.

The core contains evidence of hundreds of earthquakes and volcanic eruptions. By comparing the frequency of these events in periods of warm climate to this during periods of cool climate, scientists can better understand how climate impacts this activity.

“Learning more about how our environment responds to a changing climate and sea level rise allows us to understand how these hazards might impact us in the future, and how we might better prepare.”