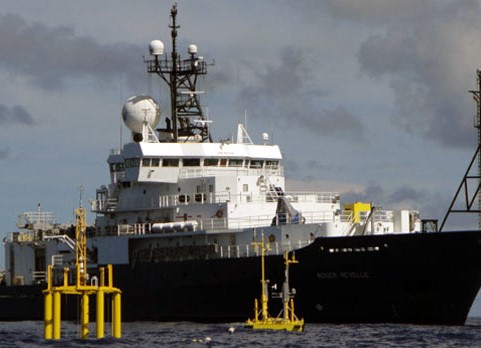 Christine Chesley from Columbia University says the research is getting closer to finding out how a subducting seamount might affect the structure and distribution of fluids in subduction zones, which impacts the types of earthquakes that occur there.

Ms. Chesley explained that the research the team is doing in the Hikurangi subduction zone shows that seamounts offshore the east cost of Gisborne are helping to create the slow-motion earthquakes that occur there.

Subduction is when two tectonic plates meet and one dives beneath the other, taking all the bumps, ridges, and extinct volcanoes on the ocean floor with it.

Slow slip events are common along the Hikurangi subduction zone, where the Pacific Plate is subducting under the Australian Plate. As the name suggests, the energy isn’t discharged through a sharp jolt (as for an earthquake) but slowly, over weeks to months.

Seamounts come in a range of sizes and shapes from bumps and ridges to mountain-like features that would have once risen higher than Mt Ruapehu under the sea. Carrying out this interesting research is technically challenging because the seafloor being studied can sometimes be kilometers under the sea.

The scientists used a special technique that allowed them to figure out the electrical conductivity of rocks beneath the seafloor. “Seawater is an excellent conductor compared to most seafloor rocks, and so this method allows us to see where the water has infiltrated,” says Ms Chesley.

“By placing receivers on the seafloor offshore from Gisborne and towing an instrument that generated electromagnetic fields just above the receivers, we were able to calculate the conductivity of a seamount on the seafloor.”

These findings mean that seamounts carry water like a sponge, so when they subduct they can probably crack and crush pieces of the upper plate and potentially release water into these cracks. This water transfer could be related to some slow slip earthquakes.

This research is part of research into slow-slip earthquakes and fluid flow at the Hikurangi subduction zone and is a key finding from the R/V Revelle voyage in 2019.