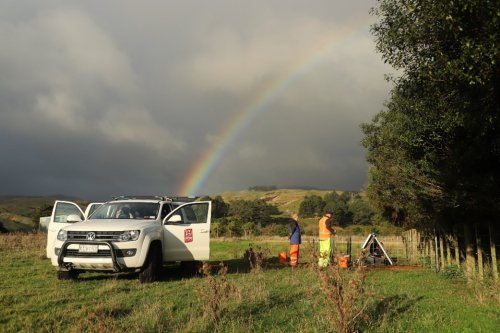 Scientists from GNS Science and Te Herenga Waka Victoria University of Wellington are installing instruments across southern Hawke’s Bay, Tararua and Wairarapa regions as part of a project to better understand the Hikurangi subduction zone.

They timed the deployment of nearly 50 temporary seismic and geodetic (GPS) instruments to record the next Pōrangahau slow slip event, which scientists expected would occur sometime this year.

Coincidentally, GeoNet data indicates that a Pōrangahau slow slip event began in the last week of May, so plans to deploy the network was brought forward by a couple of days to capture the start of the event.

Project co-leader, GNS Science Geophysicist, Katie Jacobs says “slow slip events are common along the Hikurangi subduction zone, where the Pacific Plate is subducting under the Australian Plate. As the name suggests, the energy is discharged not through a sharp jolt (as for an earthquake) but slowly, over weeks to months”.

They occur when the boundary between two plates becomes temporarily ‘unstuck’, and the plates begin creeping past each other for a period of time, sometimes weeks or even months.

Humans can’t feel slow slip earthquakes as they happen so slowly. They are also too slow to be picked up by seismometers, so they have to be recorded with special GPS equipment that can measure the slow movement of the land.

Pōrangahau is at the centre of the project because it experiences slow slip earthquakes approximately every five years, with the last one occurring in 2016 after the Kaikōura earthquake.

The current instrument deployment follows others in the last several months to place 26 sensors on the seafloor off Pōrangahau, and six on land, and is in addition to the data continually collected by the GeoNet network.

The onshore and offshore network will allow scientists to capture where the slow slip occurred in much greater detail, and to record many small earthquakes related to the slow slip event. Together, these will provide a clear picture of how energy builds up and gets released.

“Analysing the small earthquakes occurring both before and during a Pōrangahau slow slip event is a fantastic opportunity to test our ideas around how these slow slip events happen,” says GNS Science Seismologist and project co-leader, Dr Emily Warren-Smith,

“We’ve observed previously that the behaviour of small earthquakes changes both prior to and during slow slip earthquakes, but not in enough detail to fully understand why.

“New data collected in this project, from additional instruments, will greatly improve our understanding of how and why these slow earthquakes occur so regularly, and what causes them to happen in the first place.”

These slow slip events are associated with swarms of small quakes, and a magnitude 4.2 earthquake near Waipukurau on 30 May is likely related to slow slip activity.

The overall project will enable scientists to determine whether there are any observable changes in the Hikurangi subduction zone that could be used as future monitoring tools to better forecast large earthquakes.

This Marsden-funded project is one of several large research projects working to better understand the Hikurangi subduction zone and the hazards it poses to New Zealand, and it would not be possible without the support of the many landowners hosting a temporary site.