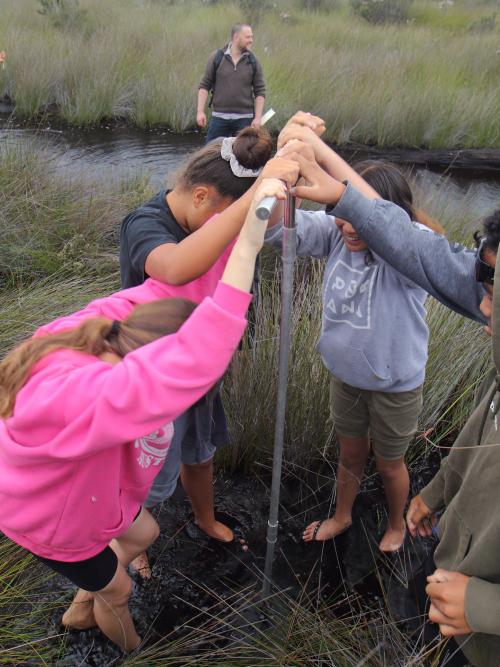 Scientists are opening up the amazing world of science for year 7-9 school students and teachers in the Wairarapa, through a GeoCamp, a two-week field-based learning experience.

GeoCamp gives local students the opportunity to learn from leading scientists from GNS Science about the geological forces that have shaped New Zealand.

GNS scientist Dr Kyle Bland says the aim of GeoCamp is to open up the world of science through a hands-on experience outside the classroom.

“These camps are for all students, not just for those who already like science. We take students outside of the classroom to learn more about their local environment.

“For example, students will join us at local geological sites such as Lake Onoke, Pigeon Bush (Wairarapa Fault), and Mangaopari Stream to hunt for fossils, fault lines and learn about sea-level rise.”

Scientists teach students to learn how to read the landscape around them.

“We show students what they can learn about the past and use this to try and tell what might happen in the future as our environment changes,” says Dr Kyle Bland

At the end of GeoCamp, the students will showcase their discoveries in a free public science expo at Greytown Town Hall on the 22 May.

The community is invited to join the students as they share the exciting science discoveries they have made, as well as attend two public science talks in May.

This year will be the seventh GeoCamp to be held since it first started in Hawke’s Bay in 2012.