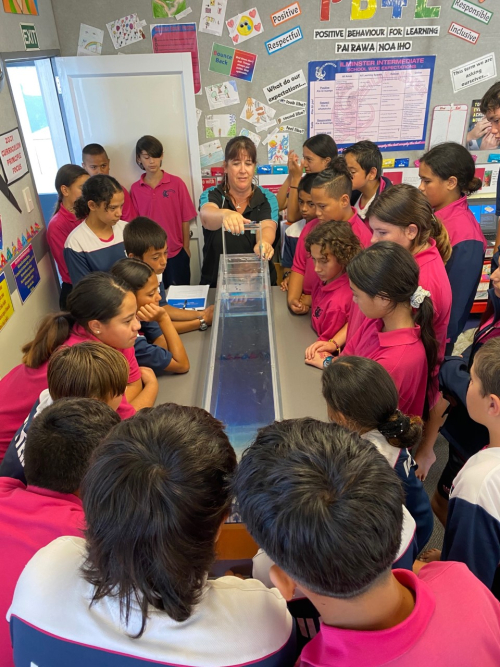 Students at Hatea-a-Rangi and Te Kura Kaupapa Māori o Tokomaru in Tairāwhiti have been the first to take part in a new roadshow aimed at educating about the risks posed by a Hikurangi subduction zone earthquake and tsunami.

The school roadshow developed by East Coast LAB (Life at the Boundary) and delivered by an educator from the National Aquarium of New Zealand will visit 10 schools from Tairāwhiti down to Wellington. The roadshow is funded by the Earthquake Commission (EQC).

The Hikurangi subduction zone runs along the boundary where the Pacific tectonic plate moves beneath (subducts) the Australian plate. The zone runs about 50-100km offshore from Gisborne to Marlborough and is New Zealand’s largest and most active fault.

It has produced 10 major earthquakes across the last 7500 years, with the last large earthquake being about magnitude 8, between 470 and 520 years ago.

“Subduction zone faults are responsible for most of the world's largest earthquakes and tsunami, with Japan 2011 being the most recent example,” says Kate Boersen, East Coast LAB Project Leader.

Boersen says that the M7.1 earthquake off East Cape and two large quakes in the Kermadec Trench north of New Zealand, which sparked tsunami evacuations, has meant that the school roadshow has a fresh relevance.

“The East Cape, or Te Araroa, quake did not occur on the Hikurangi boundary, but it was very close by and many of the regions that felt that quake most strongly may also be those most impacted by a Hikurangi event. So, earthquake and tsunami are hazards adults and young people alike are very aware of right now.”

During the school sessions, students will learn about the latest hazard and impact science through interactive activities and even get to create a tsunami themselves, in the travelling tsunami wave tank.

“Growing the understanding of natural hazards amongst Aotearoa’s young people is a key part of our public education programme of work at EQC,” says Dr Jo Horrocks, Chief Resilience & Research Officer at EQC. “We know that when we provide this information at a young age it has a good chance of sticking and carrying that knowledge through to adulthood.”