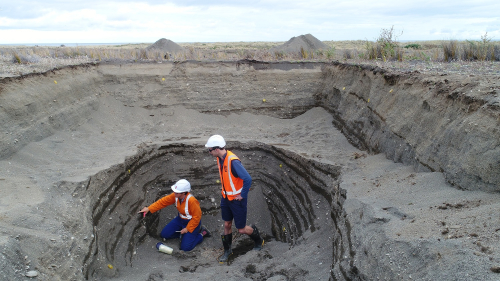 Scientists have started digging several pits along the south Wairarapa Coast to unearth the secrets of previous earthquakes and tsunamis to better understand future risks to the greater Wellington region.

The research near Cape Palliser is part of It’s Our Fault, a project funded by the Earthquake Commission (EQC), Wellington City Council and Wellington Region Emergency Management Office, which studies the region’s earthquake hazards to help the communities prepare for a natural disaster.

The distinct natural terraces along the rugged Cape Palliser coastline are a testament to the enormous forces pushing the seafloor to the surface throughout the centuries, as witnessed in Kaikōura in 2016.

“There are powerful visual clues at Cape Palliser and this research will tell us when these earthquakes occurred and hopefully which fault triggered them,” says GNS Science earthquake geologist and project lead, Dr Nicola Litchfield.

“As we dig the pits, we look for shellfish that died in each event, and by carbon-dating those shells we can determine when those earthquakes occurred,” says Dr Litchfield.

The region was hit by a tsunami up to 11m high in 1855 as a result of the 8.2 magnitude Wairarapa earthquake, and scientists are working with iwi to identify other past earthquakes.

“We will be working closely with archaeologists and local iwi as this site has substantial remnants from old Māori settlements,” says Dr Litchfield.

“It is unclear why and when the local Māori population left this area, but some archaeologists believe the sudden departure could have been triggered by a tsunami, so it will be interesting to see if we can find out more about that.”

Litchfield explains that scientists have done a lot of similar work along the North Island’s East Coast and the top of the South Island to find out more about the Hikurangi Subduction zone and other smaller faults, “so this is all part of that puzzle”.

“Once we can date the quakes on the south Wairarapa coast, we compare the data with those from other sites around Cook Strait, which will tell us what fault caused the land movement,” says Litchfield.

The geologist says that the Wellington region is affected by a number of active faults, and better understanding which faults impact different areas will help the region prepare for future events.

“For example, the project identified that water pipes crossed the Wellington Fault at seven locations  Authorities have since stored spare parts near those sites, so the pipes can repaired quickly in a scenario when spare parts may be difficult to transport,” says Dr Horrocks.

“Wellington City Council is now also subsidising water tanks so individual households can take ownership of their resilience after a natural disaster.

“That is a great example why EQC wants to supports this type of research that directly influences how a community can build more resilience to natural disasters.”