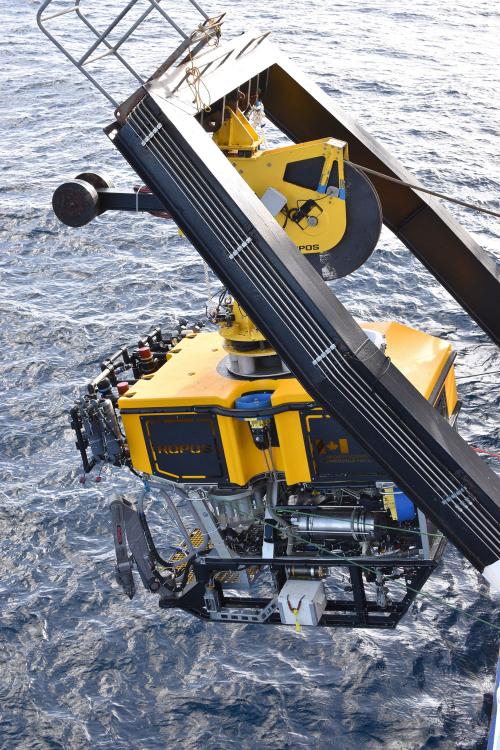 New Zealand and US scientists have collected new data offshore that may give new insights into the M7.3 earthquake that rocked the East Cape on 5 March – gathered using a state-of-the-art underwater Remotely Operated Vehicle (ROV) called ROPOS.

Scientists from GNS Science, NIWA and University of Washington have been onboard NIWA’s research vessel Tangaroa studying New Zealand’s largest earthquake fault, the Hikurangi subduction zone, where the Pacific Plate subducts beneath the east coast of the North Island.

A team of eight engineers from the Canadian Scientific Submersible Facility used ROPOS to download the latest data from the two undersea observatories monitoring earthquakes and slow slip earthquakes.

The two observatories were installed up to 400 metres beneath the seafloor by the research vessel JOIDES Resolution more than three years ago and have been actively recording changes in the Earth’s crust due to earthquakes and slow slip earthquakes off the coast of Gisborne since then.

“They reveal very interesting changes during and after the sequence of earthquakes off East Cape and the Kermadecs a couple of weeks ago.

“We can also see smaller slow slip earthquakes (lasting days to weeks) in the data that are difficult to detect with the shore-based GeoNet network and large signals during a slow slip event offshore Gisborne in March and April 2019.

“These new results have allowed us to observe how slow slip earthquakes evolve offshore the east coast with much greater detail than any other types of data that we have had before.”

ROPOS also successfully retrieved 16 seafloor instruments, which have been measuring the rate of water flowing out of the seafloor and collecting water for chemical analyses.

University of Washington Associate Professor Evan Solomon says despite significant logistical challenges and delays due to Covid-19, the team successfully recovered and sampled all of the instruments deployed along the Hikurangi subduction zone in 2019.

“We now have an unprecedented two-year record that will allow us to understand the role that water deep beneath the seafloor plays in the timing and occurrence of slow earthquakes along the Hikurangi subduction zone.

“We also surveyed and sampled seep sites offshore from Kaikōura providing new insight into the hydrogeology of the southernmost section of the subduction zone.”

The information collected on this voyage will add to our growing understanding of the Hikurangi subduction zone and the earthquake and tsunami risk it poses to Aotearoa New Zealand.

“We have managed to achieve so much on this research voyage including exploring some previously unseen parts of our offshore plate boundary,” says Dr Wallace.

It is hundreds of metres high and was created during volcanic eruptions that occurred over 80 million years ago, and is now home to a spectacular and diverse ecosystem.

The team was also able to get an up-close look at the submarine "Boo Boo Fault", which is the most active fault in Cook Strait.

The voyages are supported by funding from the New Zealand Ministry for Business, Innovation and Employment, and by the United States National Science Foundation.