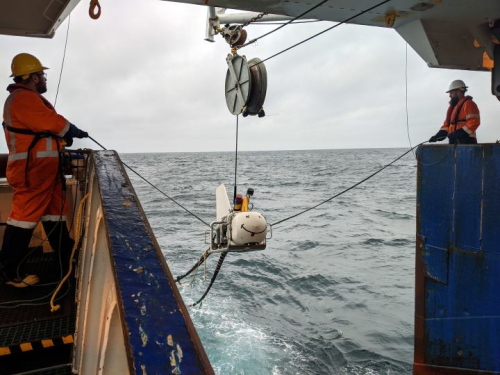 Scientists from New Zealand, Japan, and the United States are currently involved in two back-to-back voyages to investigate the inner workings of the Hikurangi subduction zone off the North Island’s East Coast.

The Hikurangi subduction zone is where the Pacific Plate dives down, or “subducts” beneath the east coast of Te Ika-a-Māui / North Island. It is New Zealand’s largest fault and it is believed to be capable of generating magnitude 8-plus earthquakes and tsunamis.

The first voyage, which has just concluded, deployed specialised equipment from the United States onto the seafloor to visualise the structure of the subsurface and investigate how fluids are distributed within sub-seafloor sediments.

Programme leader Dr Jess Hillman of GNS Science said this would enable scientists to better understand how the movement of fluids is related to activity on our largest offshore faults and the occurrence of subseafloor gas.

Voyage specialist Dr Peter Kannberg, of Scripps Institution of Oceanography in the US, said earthquakes, seafloor slope stability, and seafloor gas release are all governed in some part by the presence of fluids. “Our instrumentation can detect where these fluids are in the Earth, allowing us to better understand the role of fluids in modulating these natural hazards.”

On the second voyage, setting off from Wellington this weekend, scientists from Japan will be joining researchers from GNS Science and Victoria University of Wellington to deploy seabed seismographs and sensitive seafloor pressure sensors off the coast of southern Hawke’s Bay and Wairarapa. The instruments will record earthquakes and small seafloor movements over parts the Hikurangi subduction zone that cannot be monitored from land.

The data collected on the second voyage will provide key information for a newly awarded Marsden Fund project led by GNS Science, which aims to investigate the physical conditions inside the Hikurangi subduction zone and find out what causes frequent, slow motion earthquakes (lasting weeks) to occur there.

This project will build on years of investigation by many scientists, including the two voyages happening this month.

Voyage leader Dr Laura Wallace of GNS Science said the seafloor pressure sensors record the upward or downward movement of the seabed. “They can detect ‘slow motion earthquakes’ offshore, and may also provide evidence about how the zone will behave in future large earthquakes,” she said.

Although the voyages are focusing on different areas of the subduction zone, the new information collected by the instruments will help researchers learn more about the subduction zone and the potential causes of large earthquakes centred off the East Coast.

“Working with international research partners is hugely beneficial to our science, as they bring technologies not currently available in New Zealand. The two voyages represent more than $4 million of co-funding from our international partners,” Dr Hillman said.

The voyages are supported by funding from MBIE’s Endeavour Fund and the Marsden Fund administered by the Royal Society. Time on NIWA’s research ship Tangaroa is supported by MBIE through the Strategic Science Investment Fund.

GNS Science has created a short animated video that explains the process involved in a slow-slip earthquake and outlines some of the research being conducted on the Hikurangi subduction zone. It can be accessed here: https://youtu.be/xgk2zBvdOgw