Uncovering the secrets of the Pakuratahi Valley 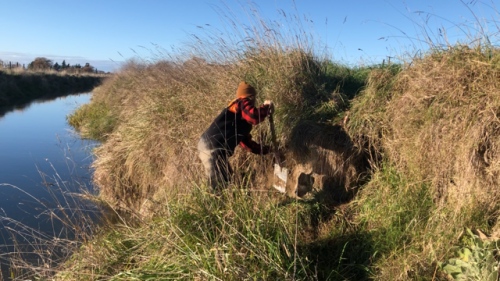 Researchers are collecting clues in the Pakuratahi Valley to determine when past Hikurangi subduction zone earthquakes and tsunami have occurred in Te Matau-a-Māui Hawke’s Bay.

The Hikurangi subduction zone is where the Pacific Plate subducts, or dives beneath, the Australian Plate. Subduction zones are a type of fault that can produce very large earthquakes and tsunami.

“We’re specifically looking for layers of sediments that may have been disturbed during an earthquake, or shells that have been carried inland by a tsunami to radiocarbon date” says Te Herenga Waka Victoria University of Wellington PhD student Charlotte Pizer.

“Pakuratahi Valley is one of three sites that we’ll be investigating in Hawke’s Bay and we will be using the evidence we collect here to compare with evidence in sediment cores that have been collected offshore along the Hikurangi subduction zone”.

“Our understanding of the frequency and size of subduction earthquakes is currently limited to information we can gather from our prehistoric, coastal lowland geological record. We want to increase the precision of this record by integrating offshore and onshore evidence of very large earthquakes and understand the tsunami hazard they pose” says Ms Pizer.

Project Leader for East Coast Life at the Boundary, Ms Boersen says “This ongoing research to refine the Hikurangi subduction earthquake and tsunami record allows us to better assess the risk of these hazards, the likely impacts and inform how we can prepare for future earthquakes”.

Ms Pizer’s PhD research is a joint collaborative project between Victoria University of Wellington and GNS Science, and is part of a five-year Ministry of Business, Innovation and Employment (MBIE) research programme called ‘Hikurangi Subduction Earthquakes and Slip Behaviour’.