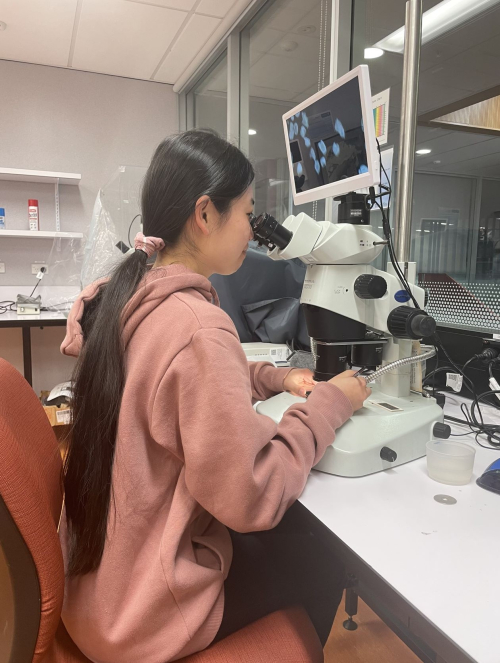 University of Auckland Honours student Natasha Ngadi is studying foraminifera fossils to determine past sediment transport processes, sea level and seismic activity during the early Holocene period, around 11,700 years in the past.

Ngadi is part of a large Marsden funded project, led by Dr Lorna Strachan from the University of Auckland, investigating a link between climate, sea level, and earthquake and volcanic activity.

While this hypothesis is not new, the team are the first to investigate it, and are doing so using a 500-metre-long core taken from the Hikurangi Subduction Zone, Aotearoa New Zealand’s largest and most active fault.

The core is a record of our geological past, as far back as one million years. Ngadi’s work focuses specifically on the early Holocene, the geological period that began at the end of the last ice age and continues to this day.

"I chose to study the Holocene period because it is the current geological period that we're living in, so it's important to understand how sediment in the sea might be triggered to move by future earthquakes which may cause further hazards."

Understanding past water depth, called paleo-depth, is significant in this project for understanding the environment in which earthquakes and volcanic eruptions occurred.

The microscopic fossils of foraminifera, a single-celled organism commonly made of calcium carbonate, allows Ngadi to investigate this.

“Foraminifera fossils can give an indication of the water depth they were living in, that gives us a marker of sea level” said Ngadi.

Foraminifera are abundant in marine environments and are hugely diverse, varying across water depth, location, climate, and through time. Their fossils can be found in marine sediments, like those in the core taken from the Hikurangi Subduction Zone, and are a key tool for scientists in understanding the past.

“It’s exciting” said Ngadi “finding a paleo-depth indicator, it allows you to build a story of the past.”

The sediment core, retrieved by IODP (International Ocean Discovery Program) from the Hikurangi Subduction Zone, is not the only core that Ngadi is studying.

Ngadi’s research compares the Hikurangi core with another core taken from the Tūranganui Knoll.

“The Tūranganui Knoll is a seamount, an underwater mountain formed by volcanic activity” said Ngadi “the sediments and foraminifera there are quite different to the Hikurangi Subduction Zone, indicating different processes are occurring.”

Understanding the variability of sediments and foraminifera across different locations is important because they can indicate differences in the flow of ocean currents and how sediment is transported in the deep sea due to earthquakes.

The source and flow of sediments are influenced by climate, environment, and tectonic changes so understanding where both foraminifera and sediments originated from allows scientists to create a clearer picture of paleoclimate, paleoenvironment, and seismic activity in the area.

This research is an important component of the Marsden funded project which will provide crucial insights into our seismic and volcanic futures as our climate and sea level continue to change.

Ngadi’s research is supervised by Dr Strachan from the University of Auckland and Dr Bruce Hayward from Geomarine Research and supported by Dr Martin Crundwell from GNS Science.