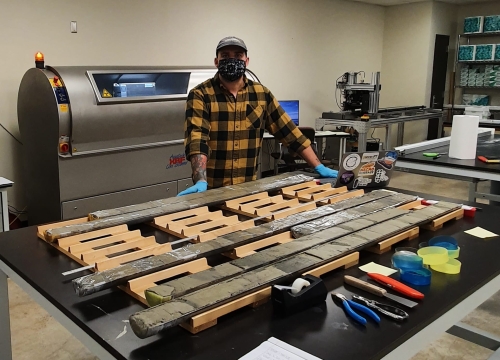 Microscopic fossils are being used to build a picture of our past oceans to help scientists understand how climate and sea level could impact earthquakes and volcanic activity over the past one million years.

A team of scientists led by Dr Lorna Strachan from the University of Auckland, are investigating the hypothesis that earthquakes and volcanic eruptions occur more frequently in periods of warmer climate and higher sea level.

While the idea has been around for some time, the team are the first to investigate it and are using a 500-metre-long sediment core from Aotearoa’s largest and most active fault to do so.

The Hikurangi Subduction Zone sits just off the East Coast of Te Ika-a-Māui/North Island, and its where the Pacific tectonic plate dives down westward beneath the Australian plate.

Understanding the age of the layers of sediment captured by the huge core is important to understanding the timing and frequency of earthquakes and volcanic eruptions. However, the long time frame the team is studying makes this process challenging.

“Radiocarbon dating is only accurate as far back as 50,000 years or so.” Said Micropalaeontologist Dr Adam Woodhouse, Postdoctoral Fellow at the University of Texas at Austin. “So, we have to also use stable isotope stratigraphy and biostratigraphy to create our age model.”

Dr Woodhouse studies the evolution of life in the ocean, and his work scanning the core at the International Ocean Discovery Programme (IODP) in Texas and analysing planktonic foraminifera, has allowed him to document the first high resolution record of sediment deposits in the Hikurangi Subduction Zone, from before the last glacial maximum until now.

Planktonic foraminifera are single-celled organisms that live in the water column, when they fall to the seafloor they can become preserved in sediment.

“The planktonic foraminifera are used in the age model in three ways.” Said Dr Woodhouse “the types of species tell us about the temperature of the water, the stable isotopes tell us whether we were in a glacial or interglacial period, and they can be used for radiocarbon dating.”

Isotopes are different variants of elements, some of which are heavier than others. During glacial periods, lighter water molecules get trapped in the ice sheets at the Earth’s poles causing the oceans to be rich in heavier oxygen isotopes.

“The isotopes are taken up by organisms living in the ocean, leaving a permanent trace of the environment in which they lived, and whether this was a glacial or interglacial period.”

Biostratigraphy uses the species themselves to date sediment. It is known when some species evolved and went extinct, so their presence in the sediment gives an estimate of its age.

“It would be like finding a T. rex tooth inside of a rock” said Dr Woodhouse “That tells us that the rock must be around 66 million years old, as it had to have been deposited when T. rex were alive. We use marine organisms in the same way.”

“During drier climates, different wind and water currents are shifting sediments into the subduction zone, and with less continental shelf between river mouths and submarine canyons due to sea level changes, sediment is channelled down onto the sea floor”

“This could affect how rocks behave when it comes to earthquakes and volcanoes.”

Dr Woodhouse’s work is a key step in this Marsden funded project, toward answering the question of how climate and sea level impact earthquakes and volcanic eruptions.

Dr Woodhouse’s work is additionally funded by the University of Leeds, NERC, and the NSF.