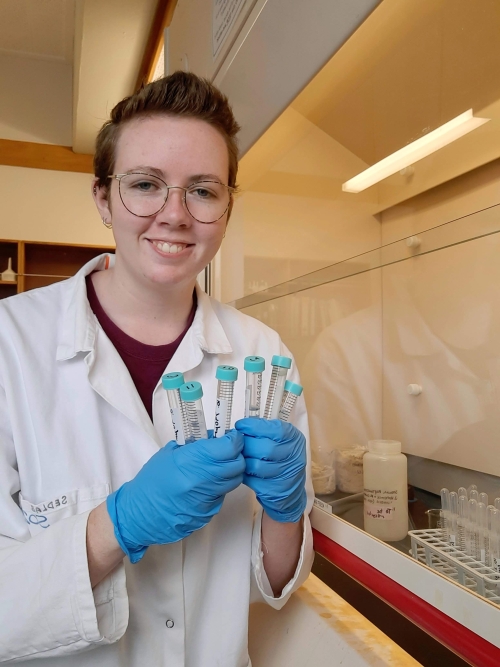 A 500-metre long core taken from Aotearoa New Zealand’s largest and most active fault, the Hikurangi Subduction Zone, will be used to uncover nearly one million years of hidden volcanic history.

Tephra is ash and other material ejected from a volcano when it erupts, which then falls to the ground, leaving a layer of tephra in the geological record. ‘Crypto’ refers to the concealed nature of these tephra deposits, which are invisible to the naked eye.

These elusive deposits are so well hidden amongst other sediments that very few studies in Aotearoa have been done on these deposits until now.

While it is well known that Aotearoa’s volcanoes have been active over the past one million years, its unclear exactly when and how often.

“The Taupō Volcanic Zone has erupted material rich in silica for the past 1.6 million years” said Clarke “but we don’t know exactly how active this zone has been for 90% of that time.”

Several factors can contribute to losing traces of volcanic eruptions. Eruptions are so explosive that they can destroy evidence of previous eruptions, and on Aotearoa’s long, narrow islands, frequent westerly winds can wipe away on-land deposits.

“On-land deposits from smaller eruptions are easily lost, which is why studies of marine environmental records are so important,” said Clarke. “Finding evidence of smaller eruptions from cryptotephra helps us to build a more comprehensive record of our volcanic activity over the past one million years.”

It is possible that these tiny ash deposits could fill in big gaps in our volcanic past, as small volcanic eruptions are more likely to happen more frequently than the enormous ones that are well represented in our geological record.

Clarke is part of a larger team of researchers working with the core to build a more comprehensive record of volcanic activity over the last one million years.

This project, led by University of Auckland researcher Dr Lorna Strachan, is testing the hypothesis that climate and sea level can impact the frequency of earthquakes and volcanic eruptions.

Once complete, this project will have established Aotearoa’s longest record of earthquake and volcanic history, and enabled scientists to determine whether there is a causal link between climate and volcanic and seismic activity.